Searching Streams for the Unknown

In the modern climate of big data, it should not surprise anyone that we can be handed a dataset that is much too large to fit onto our personal computer’s hard drive, let alone having the dataset all load into RAM. Yet, these limitations do not stop us from trying to crunch bigger datasets and harvest even more data! 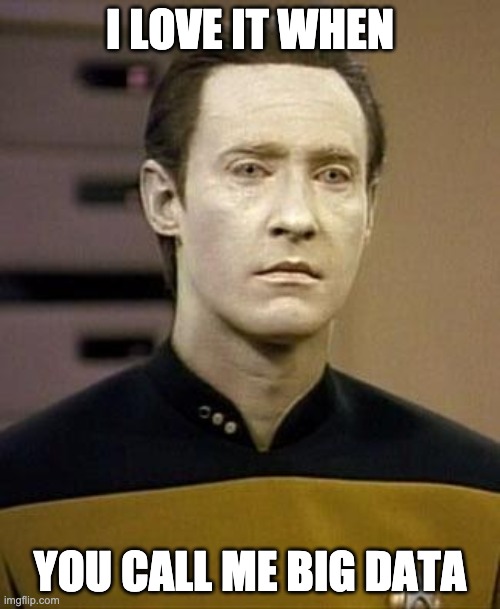 With such a data abundance, how do we construct efficient algorithms to handle the limitations of our hardware? Depending on the sort of things you wish to compute with the data, the techniques one might use can be extensive. One direction to achieve this using low extra memory is by the construction of streaming algorithms. This topic will be the focus of this post, so let’s get rolling!

So one might ask, what is a streaming algorithm? To start, let us consider what a stream might be. A stream could be viewed as a sequence of information that we iterate through until we hit the end of the sequence, if there is an end. In some contexts, one can only pass through a stream once while in other contexts one pass through the stream as many times as needed.

Searching for a needle in a haystack

To solidify the idea of a streaming algorithm, we are going to dive into tackling the following problem:

Suppose we are given a stream $S = (s_1, s_2, \cdots, s_n)$ of size $n$ where each variable $s_i$ corresponds to real number. We are then told that there exists a unique number that appears at least $X$ times in the stream. Describe an algorithm that can find this unique number and describe the number of passes this algorithm requires through the stream of data, given you are handed the value $X$.

This problem came up recently in a discussion with a colleague and I felt it was interesting enough to try and find my own solution for. The rest of this post will go over some algorithms that solve this problem, the first being a pretty obvious deterministic algorithm and the second being a fun one making use of randomness.

Before we get to the more interesting algorithm, let us consider what might be viewed as the more naive algorithm to handle this problem. First, define $n_X$ as the desired number that shows up at least $X$ times in the stream. The main idea of the algorithm is going to be deterministically looping over the stream, where at iteration $i$ we set the $i^{th}$ value $s_i$ as a representative and then loop over the stream $S$ and count the number of times this number appears. If this number appears at least $X$ times, we know we have found the desired number $n_X$ and we can terminate. Otherwise, we increment $i$ and continue our search. The explicit pseudocode for this algorithm is defined below.

It is pretty clear that this algorithm has us trying every type of number in the stream and seeing if its frequency is at least $X$, implying we will eventually find our desired number $n_X$ since it exists. Since for each value of $i$ we have to pass through the stream $2$ times, once to get the $i^{th}$ number as a representative and once to compute the frequency of that number, this implies in the worst case we will loop over the stream at most $2(n-X+1) \leq 2n$ times. Further, we can see that the only extra space we use other than the inputs is a few counters and a temporary number representing the representative. This implies our space complexity is at most $O(\log(n))$ bits. So this algorithm is simple, correct, and has a small space footprint!

Now before going into the analysis of the above algorithm, how can we select a representative uniformly at random from the stream? Well one approach is to start reading from the stream and assign the $i^{th}$ number in the stream a random weight uniformly at random from the interval $[0,1]$, over time keeping which ever number ends up with the largest randomly assigned value. This works because the probability the $i^{th}$ number in the stream gets the maximum value is equal to $1/n$, where $n$ is again the size of the stream. The algorithm details for this random representative sampling is shown below.

The tough question then for this algorithm is, what is the runtime? This is less trivial because it is possible the random choices will be such that the algorithm never sets the representative as $n_X$, making the algorithm run forever. As before, we will model the runtime in terms of how many times we pass through the stream. On each iteration of the loop, just as in the naive algorithm, we will have $2$ passes through the stream. So to work out the runtime of the algorithm, we must answer how many iterations of the loop to expect. This is where the real fun begins!

Recall that the assumption built into the problem is that there exists exactly one number that will appear in the stream at least $X$ times. This implies that when we randomly choose a representative, the probability we do choose the desired number is at least $X/n$. With this fact, we have the following result

When we consider the above, it is clear that the average performance of this algorithm improves upon the naive algorithm when $X > 1$. For those unfamiliar with randomized algorithms, there is another notable thing to internalize: the algorithm has this expected runtime for any input stream. In the deterministic case, it is simple to construct a worst case input by sticking all instances of our desired number $n_X$ at the end of the stream, forcing the algorithm to try every other number in the stream that is not $n_X$ before finding the desired number.

For this randomized scenario, however, the bad performance only occurs due to a poor random selection of representatives. Thus, the expected runtime is at most $(2/X)n$ for any input stream! Of course, the expected runtime does not take into account any variation. In fact, for all we know there is a decent chance of having a runtime much slower than the expected result! To get a clearer picture of the runtime for this algorithm, we can instead try to perform the analysis in a manner that tells us the worst case runtime with some level of confidence.

Now the above probability corresponds to a worst-case probability that our algorithm does not finish in $k$ iterations. This fact leads us to the following result

Suppose we are given an arbitrary input instance $(S,X)$ to the randomized number search algorithm, where $S$ is a size $n$ stream. For any real number $1 > \delta > 0$, we have with probability at least $1 - \delta$ that our algorithm terminates after the number of times we loop over the stream $S$ is $$\left(\frac{2\log(1/\delta)}{X}\right) n$$
So to prove this theorem, we note we are given a maximum allowable probability $\delta$ that our algorithm fails to finish within $k$ iterations. Let us recall from before that the probability our algorithm does not finish within $k$ iterations is at most $(1 - X/n)^k$ and further note the well known identity stating that $1 - x \leq \exp(-x)$ for all $x \in \mathbb{R}$. With these together, choosing $k$ to satisfy the inequality $$\exp\left(-\frac{Xk}{n}\right) \leq \delta$$ ensures that $(1 - X/n)^k \leq \delta$ since $(1 - X/n)^k \leq \exp\left(-\frac{Xk}{n}\right)$. If we invert for $k$, we can find that $k$ must satisfy the inequality $$ k \geq \left(\frac{\log(1/\delta)}{X}\right) n $$ which implies we can just take the minimum value of this and know that with probability at least $1 - \delta$, our algorithm finishes within $k = \left(\frac{\log(1/\delta)}{X}\right) n$ iterations. Since each iteration loops over the stream exactly $2$ times, this implies the result.

Now as we decrease $\delta$ towards $0$, our confidence of at least $1 - \delta$ is brought closer and closer to a probability of $1$ that our bound on the runtime holds true. Intuitively, smaller values for $\delta$ should force the bound on the number of times we loop over the stream to grow. The analysis validates this by having a $\log(1/\delta)$ penalty factor in the upper bound to ensure our confidence of at least $1 - \delta$. Pretty interesting! It is also interesting to note that if we choose $\delta = 1/e \approx 0.367$, we have with probability at least $0.63$ that our algorithm loops over the stream at most $(2/X)n$ times, giving us an idea how likely the average performance from earlier is! 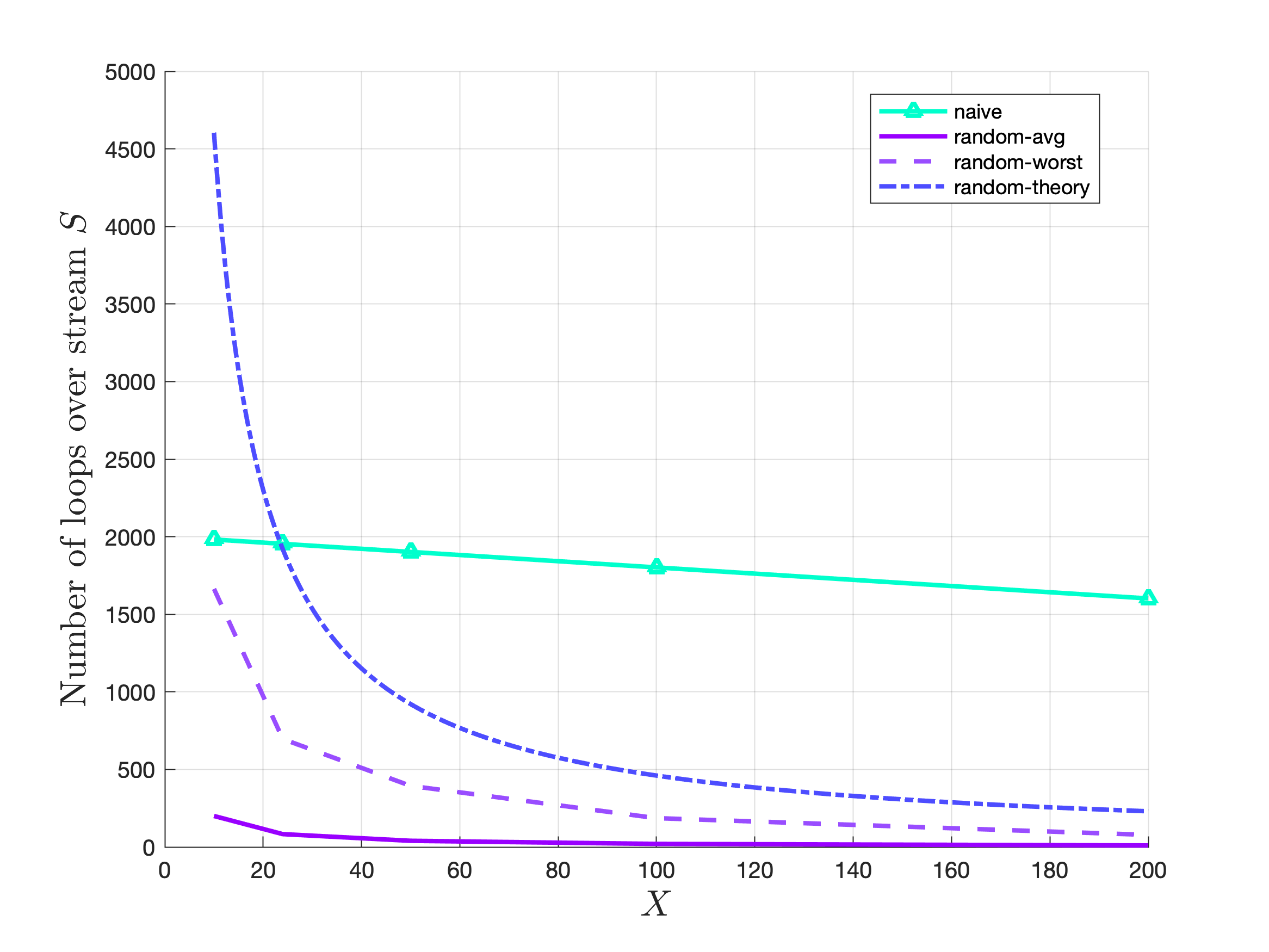 The full C++ implementation used to generate the data plotted above is shown below and should be compilable using C++11 on any modern operating system.

Within this post, we went over some basic concepts behind streaming algorithms and illustrated them through a search problem related to streams. We saw that while deterministic algorithms can be quite simple in the streaming context, sometimes using a bit of randomness can take us a lot further to solving a streaming problem efficiently. We also saw that while the deterministic algorithm had very simple analysis, it can take a bit of mathematical elbow grease to properly understand what randomized algorithms can and cannot do for us. When it comes to streaming, there are many more interesting problems to discover, so I recommend those interested go take a look and explore this deep and interesting area!